The woman who phoned was new to Portland. She had found a dog she wanted to adopt at the Oregon Humane Society, and she needed pet taxi service to his new home. Adopting an animal is exciting, and there is usually hopeful anticipation that he or she is going to a loving, forever home.

I met "Julie" and then her adoptee, "Shadow." He is a young, healthy Shepherd mix who now had another chance after his last family returned him after only four days. There weren't too many details, but Julie did learn that Shadow didn't like cars. That was a sign of the adventure to unfold.

The OHS staff leashed up Shadow and walked him to my car. Fortunately, he bounced into the back seat, without too much hesitation. Julie sat next to him, and we were on our way. We then learned about Shadow's barking. Of course, he had no idea what was ahead for him. He couldn't know he wouldn't be competing for attention again with two dogs already established in a household. He was now to be an only child, which would possibly suit him perfectly. But how was he to know that? The last time people took him out of a kennel, they returned him. How could he trust anything? So the barking continued, as we headed over the bridge to his new home. My heart went out to him and his obvious anxiety, as I tried to ignore the piercing pitch of his barks.

When we arrived at Julie's one bedroom apartment, Shadow explored every corner of the minimally furnished two rooms he was allowed in: the living room and bedroom. Walking him around the neighborhood revealed more sides of his anxious personality. He gets manic not only in a car, but around cars. Car headlights. Cars moving. Unexpected noises. He jumps in the air, barking wildly. He pulls right to left on the lead. He startles easily. He is clearly having a difficult time adjusting to city life.

Now it's a few days later. The vet who made a house call recommended small doses of Prozac. Julie is a nurse and has learned that Prozac sometimes has the opposite of the intended effect in dogs,so she is hesitant about trying it. She is now wondering if Shadow would be better off in a house in a quieter neighborhood, with an enclosed back yard to run around in.

In child welfare there is sometimes the tragedy known as "adoption disruption." It sometimes occurs when the new parents are unable to bond to the child they adopted. The child is returned to foster care. You can imagine the impact on a child. Animals can experience something similar. They know when they've been in a home, and then returned to a shelter. If it happens several times, the animal may withdraw and become so despondent that the only humane option is to gently put the animal to sleep.

Julie has a heart filled with love. But what if Shadow needs more than that? What would be best for Shadow, I wonder? Adoption disruption, in his case, could give him another chance at finding a home that may be a better match. A trainer may be able to bring him around, though it's possible that his fears are so imbedded that no amount of Prozac will do the trick. However it turns out, I pray that it works in Shadow's favor. He deserves that chance.
Posted by Petsitter-Portland-OR at 10:03 AM No comments: 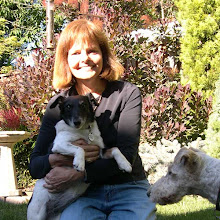